Just ‘ bumping along’ or  ” chavving awa’ “”  ( Aberdonian phrase of my youth, and a step up from “it’s a sair fecht” ), came to mind  as I answered a ‘ HOW are YOU? ‘ enquiry from an out-of-touch-for-too-long acquaintance. My response was at once an attempt to say ‘enough’ and of course to say little in real terms about HOW I was. Existential deflection of the well-practiced kind. Ten out of ten.  T 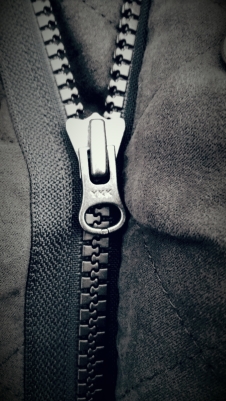 he questioner had caught me at a time when my internal locus of control ( yes , really )  was performing under-par and I had given into the perception, weirdly, that I was just ‘ doing away’ when I was ACTUALLY pretty damn storming along .

But not allowing myself to say it, own it as we therapists love to call it , feel it, and certainly not to proclaim it in response to this douce enquiry.  The internal Critical Parent (TA ) voice was rather content that the zip was firmly closed on that option.

So often I have the same conversation, in different guises, with clients…  the need to find our ok-ness with letting the ‘other ‘ in , with the revelation of our struggles or triumphs, our anticipation of being rejected and our advance need to hold back. How much, how often we deny ourselves the ‘ gifts of others to us’.

And we say we are ‘stuck’…. like that zip… which has something to do with keeping stuff in , and other stuff out.